“I decided a long time ago that I belong wherever I choose to be.”

Dudley Edmondson – writer, photographer, public speaker and author of ‘A Youth’s Look at Black and Brown Faces in America’s Wild Places’ – is talking to me over the phone from his home in Duluth, Minnesota. He is, in so many ways, your classic do-it-all outdoor content creator; as comfortable capturing nature on camera as he is writing and talking about it at length.

In the overwhelmingly white industry in which he works though, Dudley’s skin colour still makes him somewhat of an anomaly; an exception that proves the rule.

“Wherever I choose to go is where I’m meant to be, otherwise I clearly wouldn’t be there. That’s just the philosophy I’ve adapted,” he says, “I refuse to let other people intimidate me out of a space with stares, or grumpy attitudes, or those kinds of things. To me, I see it as an intimidation bluff. America has over 600 million acres of public land and it belongs to everyone. I pay my taxes. I’m entitled to be in these spaces, and I will go.”

“America has over 600 million acres of public land and it belongs to everyone. I pay my taxes. I’m entitled to be in these spaces, and I will go”

This year, racial inequality has been in the news cycles like never before. The Black Lives Matter protests following the death of George Floyd, an unarmed black man who died while being detained by four police officers in Minneapolis, Minnesota, captured the world’s attention with traditional media outlets often struggling to keep pace with the live, on the ground, updates going viral on social media.

There was, in amongst it all, a sense that people were finally starting to wake up to the realities of systemic racism and police brutality.

“Millennials tend to be a generation of people that have had enough of things not being the way they think things should be and they don’t spend a lot of time trying to appease people. They want what they want, and they want it now,” Dudley tells me. 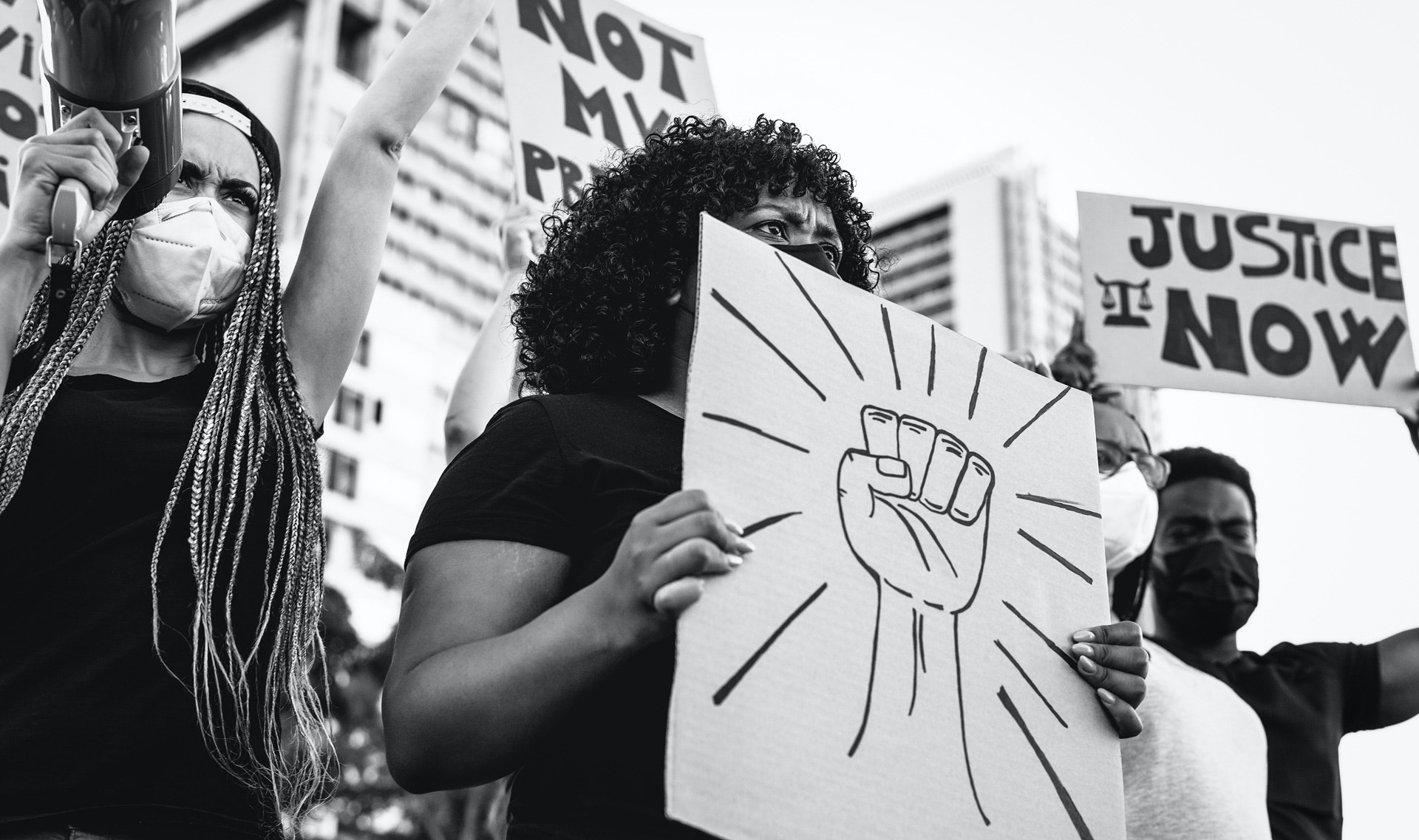 Of course, in an increasingly divided world, the issues raised by the Black Lives Matter movement have seen those on the other side of the political and cultural fence doubling down on their standpoint – refusing to give an inch to people they deem opponents. See the “All Lives Matter” reply guys, hammering out the same short-sighted view over and over again.

The spotlight, which initially focused on the police, soon zoomed out and began to illuminate everything from the low percentage of black people in senior management positions, to the higher number of COVID-19 deaths in the BAME community, to the use of ‘blackface’ in comedy shows. Mirrors were put up everywhere, with many more white people than ever before taking a moment to reflect on their privileged position in society.

The outdoor community too has had its own reckoning with inclusivity and diversity, with more and more publications, programmes, and podcasts covering the ‘whiteness’ of the adventure space. Predictably, this had led to a backlash from the right – see the response to Dwayne Fields appearance on Countryfile, and the online comments that followed a piece written for Mpora by Phil Young headlined ‘Why the outdoors has a race problem and how it can be fixed.’

I ask Dudley why he thinks so many still refuse to acknowledge the problem.

“There are a number of white Americans who don’t see themselves as being racist, and they don’t think in that frame of mind so they don’t understand that there are barriers to participation that are related to racist white people making people of colour feel uncomfortable in the outdoors,” he tells me. 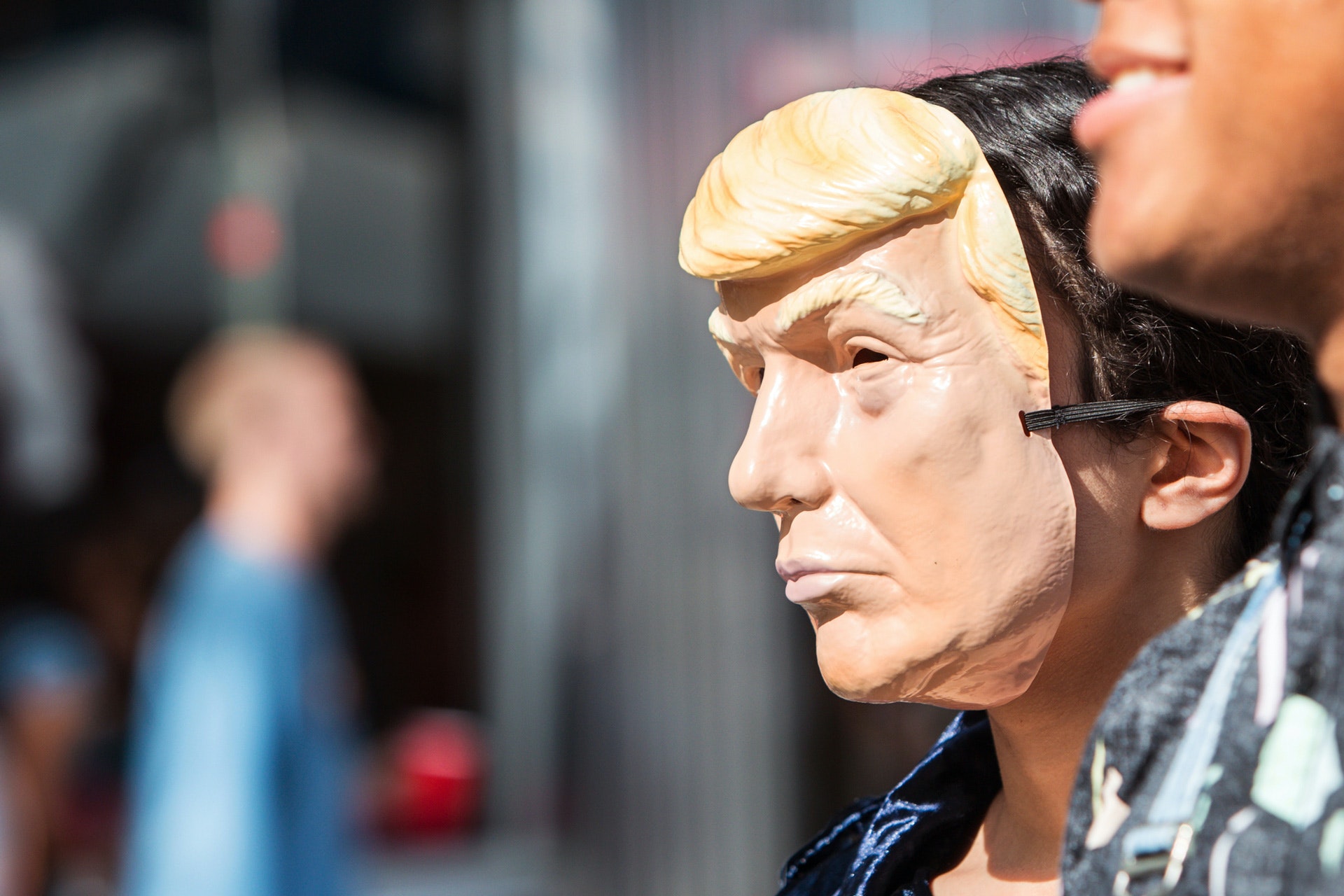 Pictured: A Donald Trump mask being worn at a Halloween parade in Atlanta, Georgia

Looking on from across the Atlantic, from our viewing platform here in the UK, it definitely seems like Donald Trump is someone who consistently chooses to pour petrol on the fire rather than actually deal with the underlying issues at the heart of things. I was curious to know how Dudley saw the president’s divisive rhetoric, and whether he felt like his four years in the Oval Office had made the American outdoors an even more unwelcoming place as a consequence.

“Trump’s done everything in his power to promote division in our country. Politically, ethnically, economically. And what people don’t seem to understand is that he’s not doing that in the name of patriotism, democracy, government. He’s doing it for himself. He’s creating all of this division as a smokescreen so that he can continue to do the things he does, and he’s using people and radicalised ideology to protect himself,” Dudley tells me.

“I think he realises that if he doesn’t get reelected, he will spend the rest of his life in court and ultimately in jail. His mindset is that if he can get at least four more years out of the presidency, he can avoid those two things. Because there are tonnes of people waiting to sue him and, most likely, he will be found guilty of tax evasion and abuse of power. I think he’s using racist people, the GOP, everybody for his own best interest. He’s a very selfish, self-centred… I’m not even sure I can call him a human being to be brutally honest. He is who he is.” 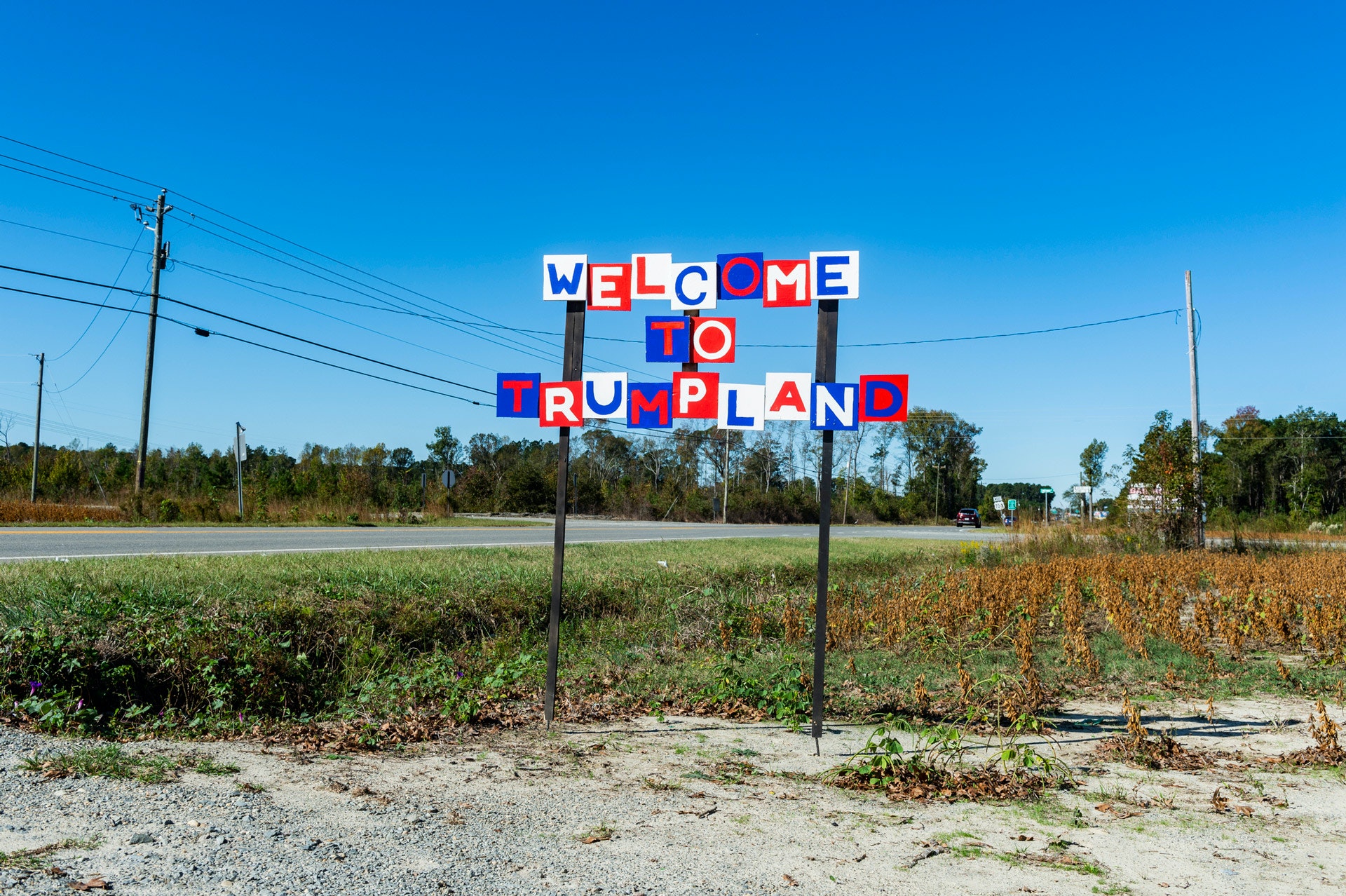 The conversation moves towards how heightened racial tensions, brought about by Trump’s presidency, have seeped into America’s outdoor spaces and impacted how people of colour are treated in those places. His response is a clear rebuttal of those who constantly insist on telling everyone to “leave politics out of it.”

“In the past, I’ve gone to these outdoor places – camped and done whatever I’ve wanted to and it never really crossed my mind. Now though, it is something in my mind if I was to go out there and do some of that stuff this year.”

Despite his concerns, it’s clear that Dudley is steadfast in his commitment to continue enjoying nature and the outdoors as much as possible – citing the positive impact it had on him growing up as a kid in Columbus, Ohio, and how it became an escape tool from reality.

“I got into the outdoors as a way to sort of escape some of the trauma related to having parents who abused alcohol,” he says. “They were good parents, they did a good job of raising us, but I feel like part of their issue was the things we’re still dealing with now. Systemic racism made their lives really hard in the early sixties when I was born. Alcohol became an escape from that life of being subordinate people in the United States of America.

“There was lots of yelling in the house, and that sort of thing going on, and so I found that when I was playing with fish in my aquarium, or butterflies and bees on my front porch, that nature was a portal for me to get out of that chaotic environment.

“We would go on these family picnics to a place called Hoover Reservoir. In that space I would be out in the woods near the picnic area, and just sort of exploring nature. When I was in that place, I wasn’t thinking about all that trauma with the yelling and screaming and arguments that went on. And so, I realised that nature had the ability to help me recover from that trauma. It’s how I got into it, and I’ve been hooked ever since.” 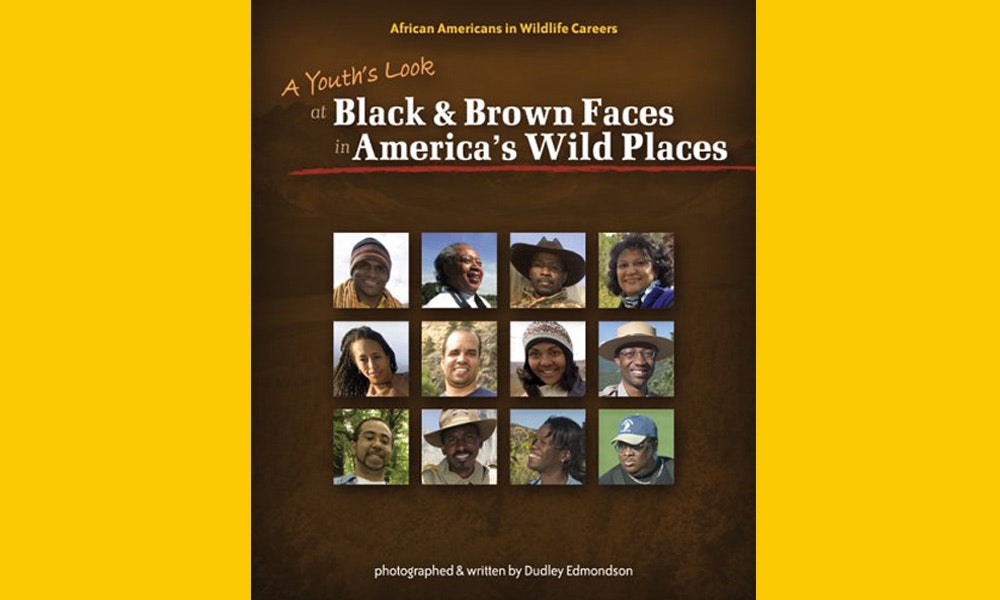 Dudley is keen to pass on his love of nature to young people for the exact same reason he got into it; the escapism and the mental health benefits. He occasionally, although not as often as he would like he says, leads events to encourage young people of colour to get outdoors.

“It helped me so much as a kid psychologically,” he tells me. “Having a connection to nature is universal. No matter where we live it can be beneficial. It’s a good way to relieve stress, going for a walk in a local woods or something like that. People don’t realise how much it can help your mind being in these green spaces, listening to nature sounds, and getting fresh air. It’s the kind of thing you have to experience to really appreciate.”

Published in 2006, his book ‘A Youth’s Look at Black and Brown Faces in America’s Wild Places’ was all about inspiring black people to get outdoors by demonstrating that being outside in big natural environments wasn’t just a white person’s pursuit.

“I wanted to create a set of outdoor role models for the African American community, let them share aspects of their lives, ultimately send out that message that black people can enjoy nature; appreciate it. I hoped it would encourage people of colour who read the book,” he says. Bringing our conversation full circle back to the Black Lives Matter movement in 2020, and the fairly widespread introspecting that’s occurred this year, I ask him if he feels his book is even more relevant now than when it was first released fourteen years ago.

“In many ways, it was ahead of its time,” he tells me.

“The subject matter wasn’t really on people’s radar when I first wrote it, and that’s probably why it’s considered a groundbreaking book because nobody had ever written a book like that before. I know people of colour who spoke to me after it came out, who’d been hoping to see something like it, and they were telling me that the book was the first of its kind.”

Despite the improved book sales in recent months however, Dudley, it’s clear, hasn’t lost sight of the bigger picture: “It’s a shame that the book is still so relevant fourteen years later and that issues that keep African Americans from enjoying the outdoors have not been solved.”

After four years of a far-right baiting President Trump, and with elections looming, America seemingly stands on the precipice of its future direction and standing within the world.

Trump’s rival for the White House is Joe Biden. Biden, who doesn’t have a spotless record when it comes to insensitive statements on race – just earlier this month he told journalists there was a lack of diversity of thought and culture in the black community, has picked Kamala Harris as the first African-American and Asian-American woman to run for Vice President. Well away from Washington D.C, and all of the politics that goes with it, the great wild and untouched expanses of North America sit waiting to be explored.

“It’s always been Zion National Park, and the National parks of Utah, for me. They’re probably my favourite places in the United States to go and recreate, and explore, and be a part of,” Dudley tells me.

“On the face, they look as though they haven’t been touched by humans. They’re desert spaces, arid landscapes, gorgeous red red rock. To some degree, they look quite inhospitable and I find beauty in that. And I would say that sometimes the more inhospitable a place appears, the more beautiful it is. I like places that show no sign of human activity and encroachment.”

A few weeks after my chat with Dudley the Trump administration announces plans to open up part of Alaska’s Arctic National Wildlife Refuge, a 19 million acre refuge about the size of South Carolina, to oil and gas leasing.

The post This Is America | An Interview With Writer And Photographer Dudley Edmondson appeared first on Mpora.