Last summer, Emily Woodhouse from Devon went to the Sierra Nevada mountain range in Spain and accomplished a lifelong dream – an entry in the Guinness World Records. We asked her some questions

With the world in its current state of strife, the thought of setting challenges for yourself, getting out there, and accomplishing things in the outdoors can feel painfully distant. The fun idea, for example, of going to the Sierra Nevada mountains in Spain and climbing more 3,000m peaks in a week than anyone else ever has currently feels like a pipe dream parked at the other end of a dark, ominous, pandemic-filled pipe.

Last summer though, Emily Woodhouse (from Devon) did precisely that. She travelled, she climbed, she climbed some more, and she broke the record she’d set out to break. We fired some questions over to Emily to get the lowdown on the record – including the thinking behind it and her personal highlights.

Hey Emily. What inspired you to take on the World Record?

Honestly, it began something like this… what shall I do with my annual leave next year? How about doing a Guinness World Record? That might be fun. Yes, I’m sure everyone’s mind works like that. Then I did some research into how it all worked and started searching the records database for things I could do (aka things mostly involving mountains, walking, or cycling). Once I’d narrowed it down to a few titles, I started looking for places or conditions that would help me out.

A Guinness World Record is hard enough – you may as well make your attempt as easy as possible! I settled on the Sierra Nevadas as a place with a high density of 3,000m mountains that were snow-free and non-technical in summer. I wanted something I could go out and attempt on my own with minimal fuss.

“I wonder if I could do that?”

If you look back far enough, I suppose you might say that the idea of one day getting a record was planted in Christmas 2004. Someone gave me the 2005 Guinness World Records book one Christmas when I was 11, so it must have been in the back of my mind since then – “I wonder if I could do that?”

The fact the book had a ridiculously shiny gold holographic cover probably helped too!

Where did you go and what mountains did you climb?

I went to the Sierra Nevada mountains in southern Spain. The original, much bolder, plan was to include the 3,000m peak on Tenerife too since it’s technically Spanish. But when 2020 showed up how it did, it was hard enough to get to mainland Spain, never mind complicating things with extra flight.

In the end, I summited 13 peaks over 3,000m that counted towards the record attempt. This was much fewer than I’d hoped but still almost double the current record. If you want the complete list, you can find it here. 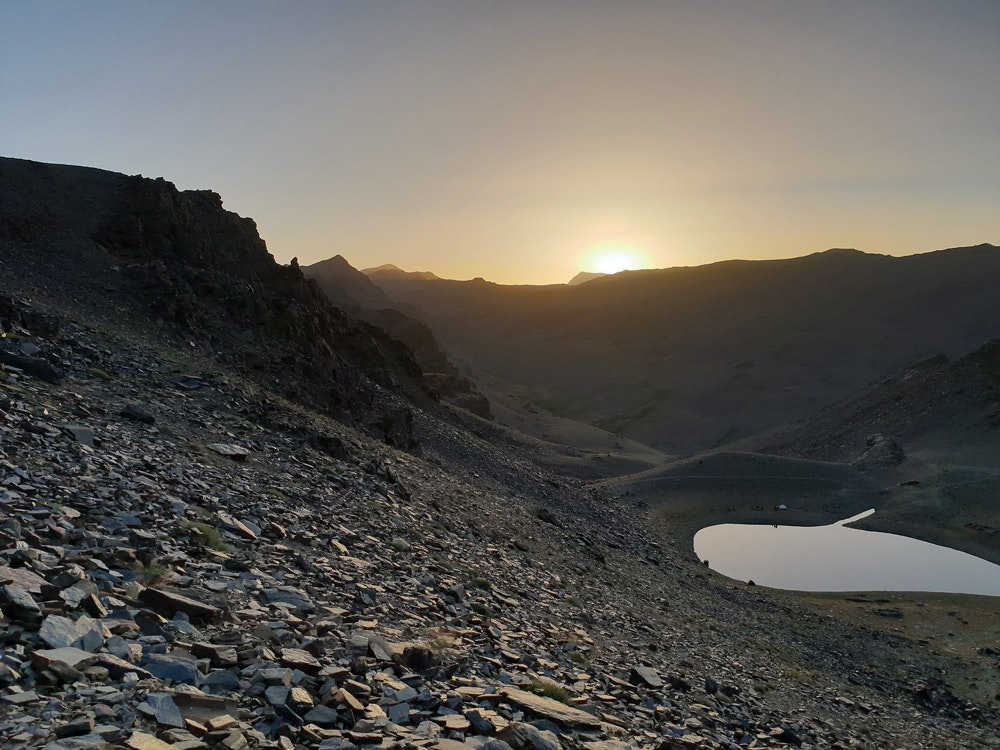 Favourite mountain from the week?

Probably Pico Juego de Bolos, which is a tiny little nobble (in 3,000m terms) off the main Ridgeline. Most people don’t bother climbing it because it’s out the way and not as grand as the other mountains nearby (like Mulhacen and Alcazaba). But I thought it was lovely: like being on a platform above the huge drop down into the valley below.

In any other circumstances, I would probably have loved Puntal de la Caldera. It was a big blocky scramble to get to a basically unmarked summit with a lot of exposure on one side. But in the heat of the day, with a huge backpack on, I couldn’t see the fun side.

Also, Puntal de Vacares and the ridge up towards Alcazaba was simply beautiful. I reached the main Ridgeline at sunrise: the rock was red, the sky was golden, the morning air was cool. Perfect! There’s nothing like a cheeky grade one scramble to start the day. 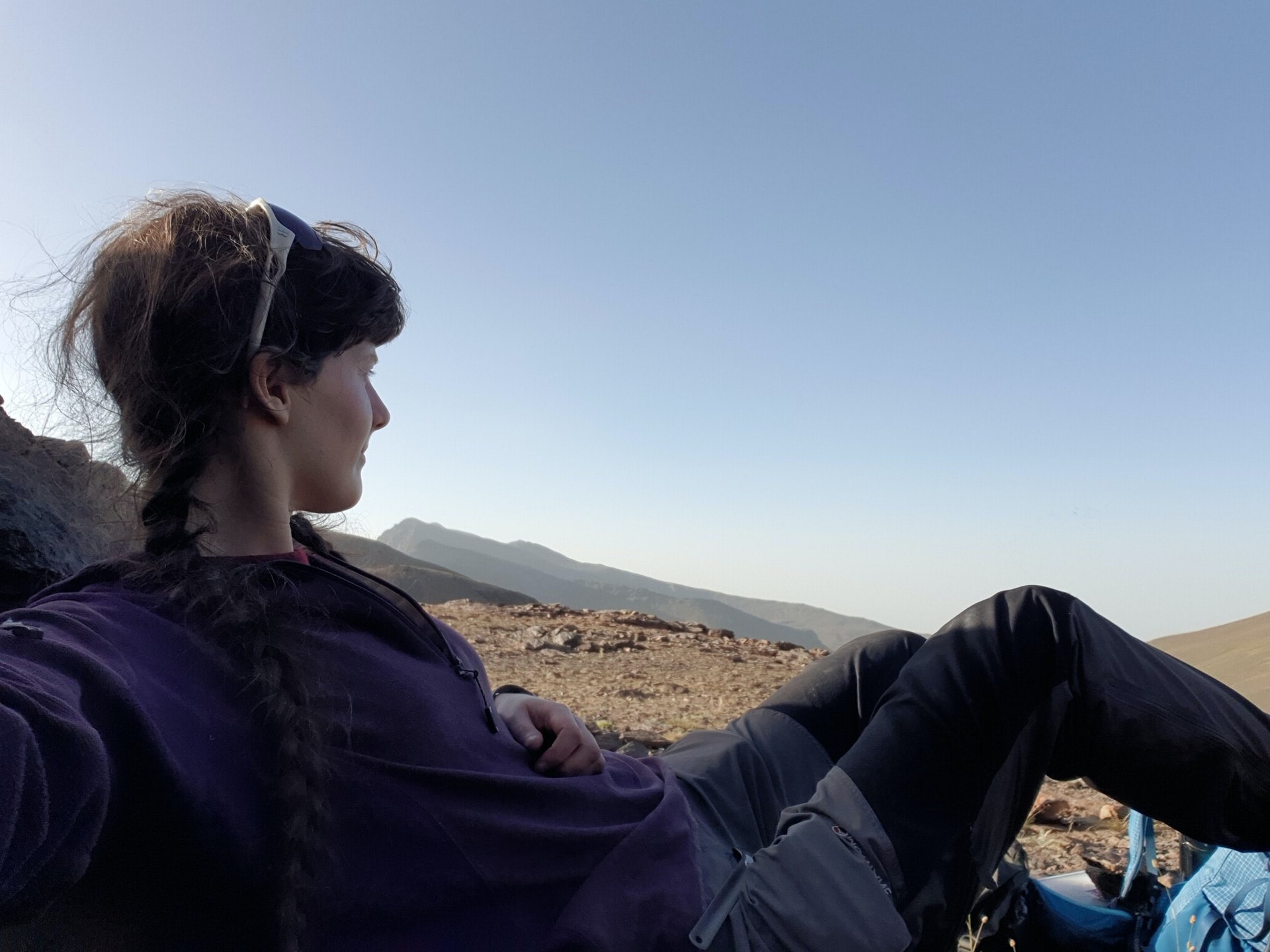 How was the weather?

It was miserably hot. Everything I read beforehand meant I was expecting temperatures of 15-20 degrees C high up in the mountains in the height of summer. In reality, it was more like above 30 degrees C at 3,000m – very often without a breeze on the ascent. I had to completely redo my planned route on the fly to make sure I could find enough water each day.

Since I did the trip solo and unsupported, there wasn’t much room for error. And to borrow from GWR’s slogan, there’s a fine line between officially awesome and officially stupid.

Do you feel the UK has rekindled its love with outdoor spaces in the last year?

I would say so, yes. Even just anecdotally, my home hills of Dartmoor have felt busier and I see more people out for a walk or a bike ride than ever before. The moor was noticeably busier this summer than I’ve ever seen it.

On the flip side, I’m in Dartmoor Rescue and we’ve had more callouts in 2020 than in each of the past five years. Either that’s a function of more people using outdoor spaces, as in statistically, or more of those people are less well prepared / experienced. It’s hard to tell for sure. Either way, I certainly feel like people are gaining a better appreciation for outdoor spaces within walking distance from their front door. 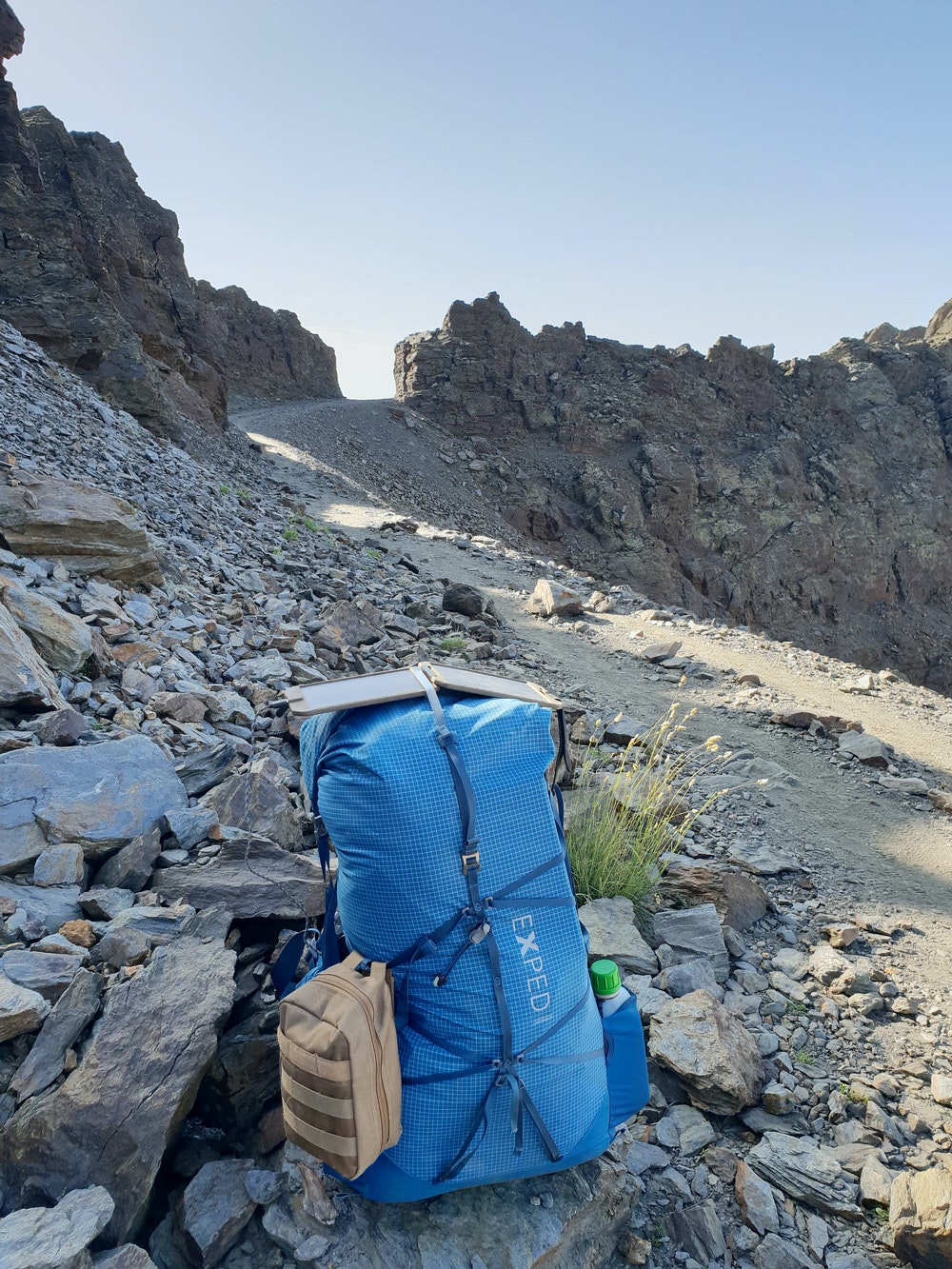 30 Best Mountain Quotes To Inspire Your Next Adventure

The Hillary Legacy | Life As Everest’s Most Famous Family

The post Climbing The Sierra Nevada Mountains In Spain | The Brit Who Set The Record For Summiting The Most 3,000m Peaks In A Single Week appeared first on Mpora.