Even if you’re not into mountain biking, Danny Hart’s run at Champery in 2011 transcends matters of sporting preference and captures the heart in that way only the most elite and special moments can.

It’s the kind of run that once seen can’t be forgotten, the kind of moment that, thanks to Rob Warner and Nigel Page’s endlessly quotable commentary, you can recite at the drop of a hat as if it were a piece of well-known spoken word.

“How does Danny Hart sit down with balls that big?”

Hart’s effort at Champery in 2011 is the ‘Anchorman’ of mountain biking, a piece of audio-visual content where the lines uttered stick in the mind as much as the iconic action happening on screen. You could watch it on mute and still enjoy it but, deep down in your gut, you know it’s even better when you’ve got the volume turned all the way up to 11; the louder, the better.

One of the most memorable moments in the history of downhill mountain biking took place in Valais, at Champery, nearly an entire decade ago. The 4th of September was a wet and wild one in the southwest of Switzerland and the conditions meant the course, already renowned for its technical difficulty, had gone up such a notch that some of the best racers in the world were struggling to put down anything resembling their finest work.

Early doors had seen Damien Spagnolo, Sam Blenkinsop, and Brendan Fairclough put some great runs down. At one point Fabien Barel, who was riding with four broken ribs and in his last ever World Championships, had found himself in second place (he eventually finished 10th). 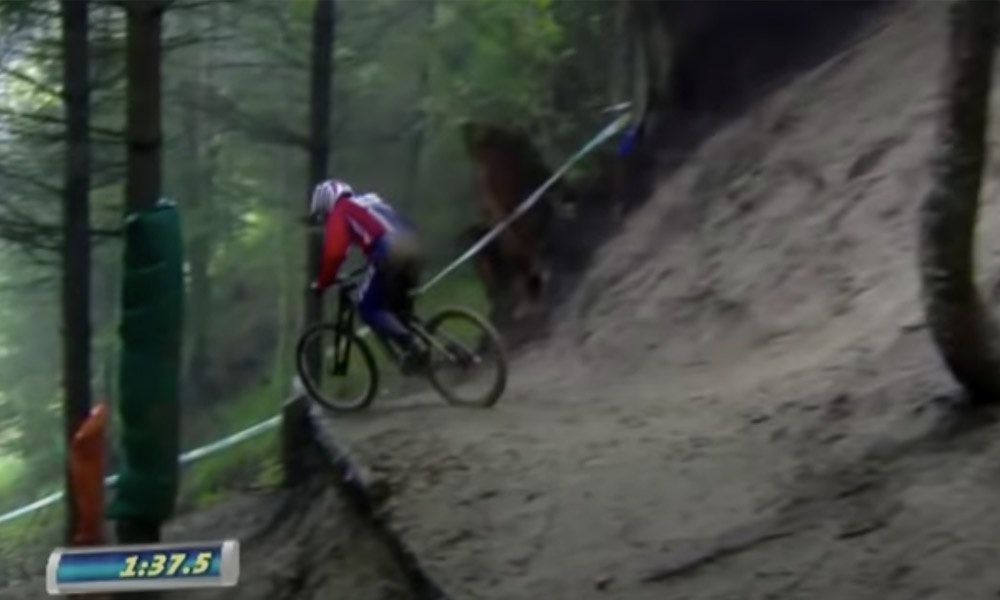 As the conditions worsened with the rain, world class rider after world class rider failed to put in a clean run. When Hart, then aged 19, primed himself at the start line there was expectation around the highly talented individual, who’d been riding well all week, but also no guarantee he’d be able to nail it where many before him that day had been unable to. Hart, though, didn’t just cope. He bossed it.

“This is the danger man to me. This is the guy I think might win it this afternoon,” says Rob Warner as Hart (aka the ‘Redcar Rocket’) kicks things off.

What followed, from this point on, wasn’t just a win. The word ‘win’, on its own, doesn’t do justice to the extraordinary events that unfolded over the next 3 minutes and 42 seconds of riding. This was a win that was so out there, so beyond the realms of believability, it made regular winning look like a draw.

“This was a win that was so out there, so beyond the realms of believability, it made regular winning look like a draw”

The crowd can’t believe what they’re seeing, and nor can Warner and Page whose increasingly excitable shouting morphs the coverage’s sound into a continuous cry of disbelief. They’re watching a homegrown hero lay waste to the opposition, and they’re absolutely loving it.

Before finishing Hart throws a massive whip, going on to cross the finishing line a mind-blowing 11.69 seconds up on Spagnolo in second. The spectators go wild, and the scenes of celebration push Page and Warner over the edge. The sense that something unprecedented is happening is overriding, a real ‘where were you when it happened’ aura coming off it even now.

Watching the run in isolation, all these years later, it’s easy to forget that there were actually three more riders left to come. Hart, in that moment, just seems completely untouchable. Job done. Get him on the podium already. After Minnaar, all that stood between Hart and glory was Gwin. Remarkably, Gwin was less than a second behind after the first split and giving Hart a serious run for his money. But after crashing and getting tangled up in the netting, he inevitably fell away finishing in 12th place.

“Hart had done it. He’d won a World Championship race by almost 12 seconds”

Hart had done it. He’d won a World Championship race by almost 12 seconds.

Over the years, Valais has seen plenty of mountain bike action. For professionals and amateurs alike, the region has built a reputation as a world class place to ride bikes. None, and we mean none, of the riders to have graced its trails though have ever done it quite like Hart did that day in 2011. Unforgettable.

Mountain Biking Posters | 10 of the Best