What happens when you combine pro mountain biker Ben Deakin and a 500+bhp hot rod?

Don’t know who Ben Deakin is? Where have you been? Don’t know what the Jackal is? That’s OK, you get a pass, we didn’t either.

So who is Ben Deakin? Better known by his scene moniker ‘The Deakinator’, Ben is an ex-Royal Marine Commando, mountain biking coach, Youtube star, and all-round good guy, with his own catchphrase – “OiOi!”

Why are we writing about him? Well, recently Ben did a couple of day’s shooting with campervan and hot rod company Jack’s Shack. He had a little spin in their 500+bhp 1950s hotrod and might have blown it up a bit – but we’ll get to that.

In short, we’re writing all about Ben and his day out in the Forest of Dean because riding bikes is great. Camping is great. Campervans are great and, we’ve just discovered that big powerful 1950s hotrods are pretty great too.

Ben started riding as a teenager when mountain biking was a more simple sport, with one type of bike and one discipline, not the plethora of subcategories that beset new riders today: cross-country, trail, enduro, downhill, park etc etc etc. It was just “a bunch of mates messing around on our bikes” and nothing more.

Fast forward a couple of years though, and he was hooked. Friends had gone on to other teenage boy hobbies of the time, namely loud, slow, and badly modified Vauxhall Novas but Ben had found his niche and began competing as an amateur in a local race series.

Fast forward again and Ben found himself in Afghanistan on patrol when, coming under fire, he sustained a bullet wound, which hastened the end of his military career – as it might. Upon leaving the military, having made a full recovery, Ben needed a new focus, so redoubled his mountain biking efforts – adding the now-obligatory GoPro to his kit list.

Ben’s not exactly your average Sunday rider, spending his days knocking around with the likes of Brendan Fairclough, one of the world’s most successful riders. He rides the biggest lines the UK has to offer, clearing 40ft+ gaps on his DMR Bikes mountain bikes. 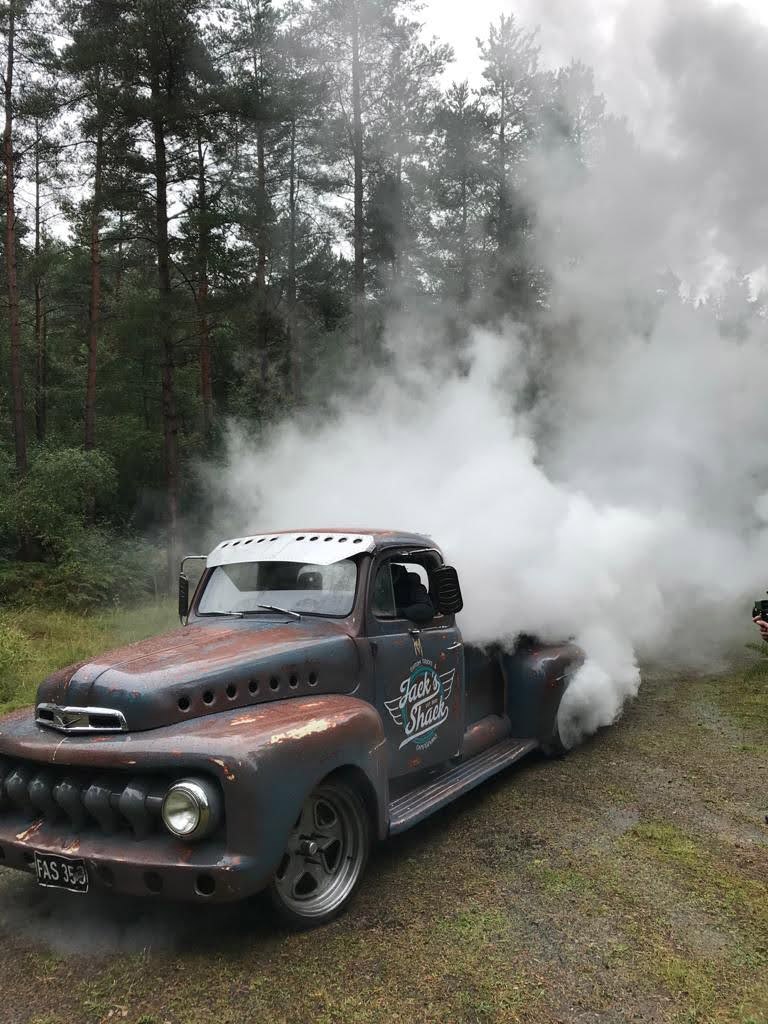 It was this skill, his genuinely upbeat attitude and a chance run-in with some gentlemen of the law in Canada that first catapulted ‘The Deakinator’ to Insta / Youtube scene fame. Today, he has what some would consider a dream job: go out, ride a bike, have fun, record it, share it. We’re sure there’s more to it than that but you get the idea.

And so it was that when he got a call from the guys at Jack’s Shack, offering a day out mucking about in their very powerful 1950s Ford F1 and riding bikes, he could not resist.

As the video suggests, the day was more than just a touch wet but with Ben driving hours north to the Forest of Dean and Jack trailering his prized truck from central Leicester, complete with a team of mechanics, filming had to go ahead regardless of the drizzle. 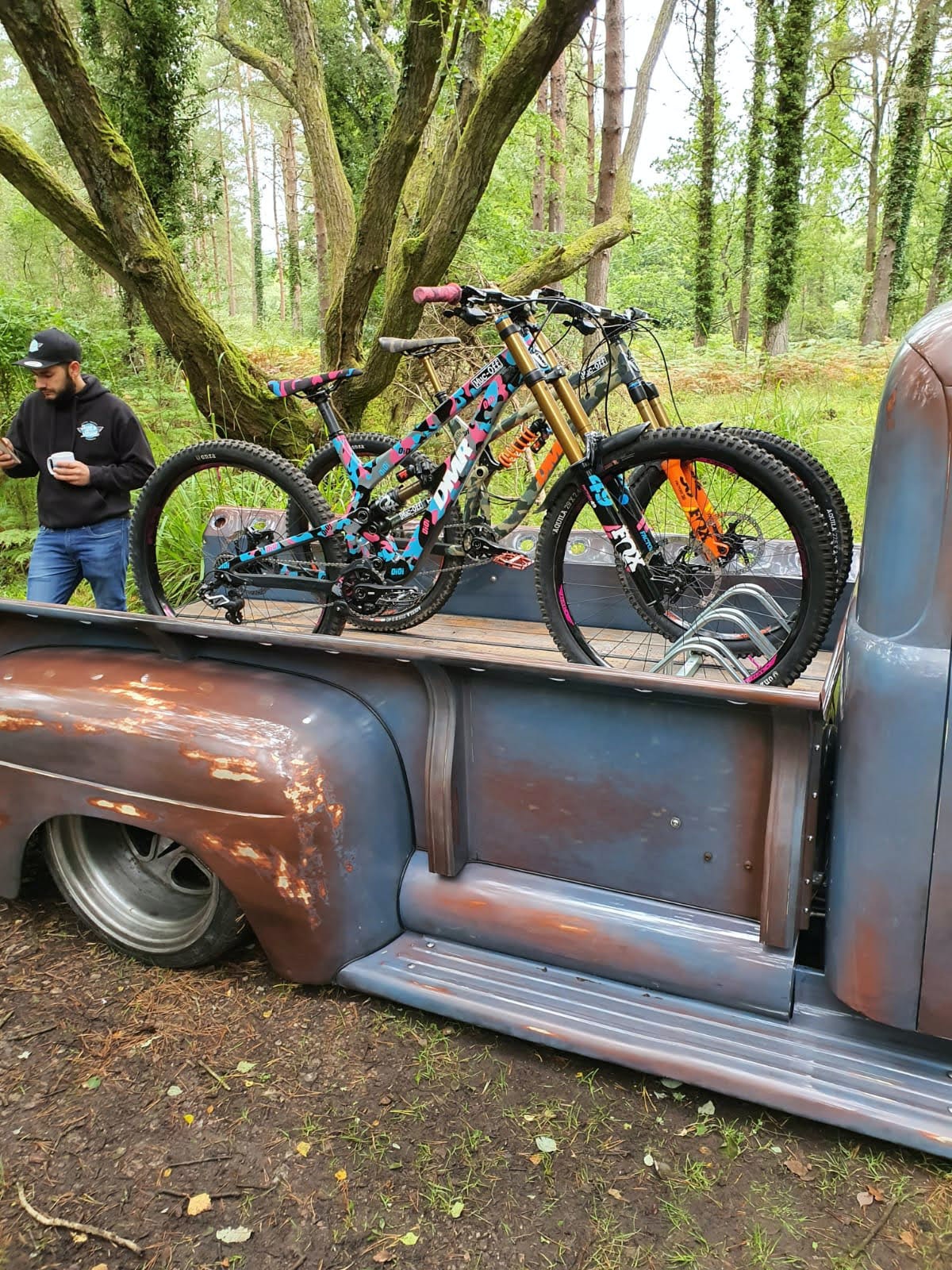 After a day of sock-soaking rain and drifting, our hero of the piece was offered a spin in Jack’s 3-speed 500+bhp, rear-wheel-drive Ford F1 and decided to try a cheeky little burnout – with encouragement from Jack.

With smoke pouring and engine revving, the film crew, onlookers and mechanics alike leant in for their Insta’ friendly snap, just in time for the car’s racing radiator to give out under the strain and explode with a deafening boom and an enormous cloud of steam. Once over the shock, Jack dried his eyes and forgave Ben for his brutal treatment of his creation.

Luckily the second day of the shoot, some weeks later, was blessed with somewhat better weather conditions, allowing Ben to show off his skills at some private trails outside of the forest’s network.

Whichever way you cut it, and whether hot rods or mountain biking are your thing, the resulting edit looks like a lot of fun to us!. We’re just trying to decide whether we should save up for a new downhill bike, a campervan or a hot rod first. 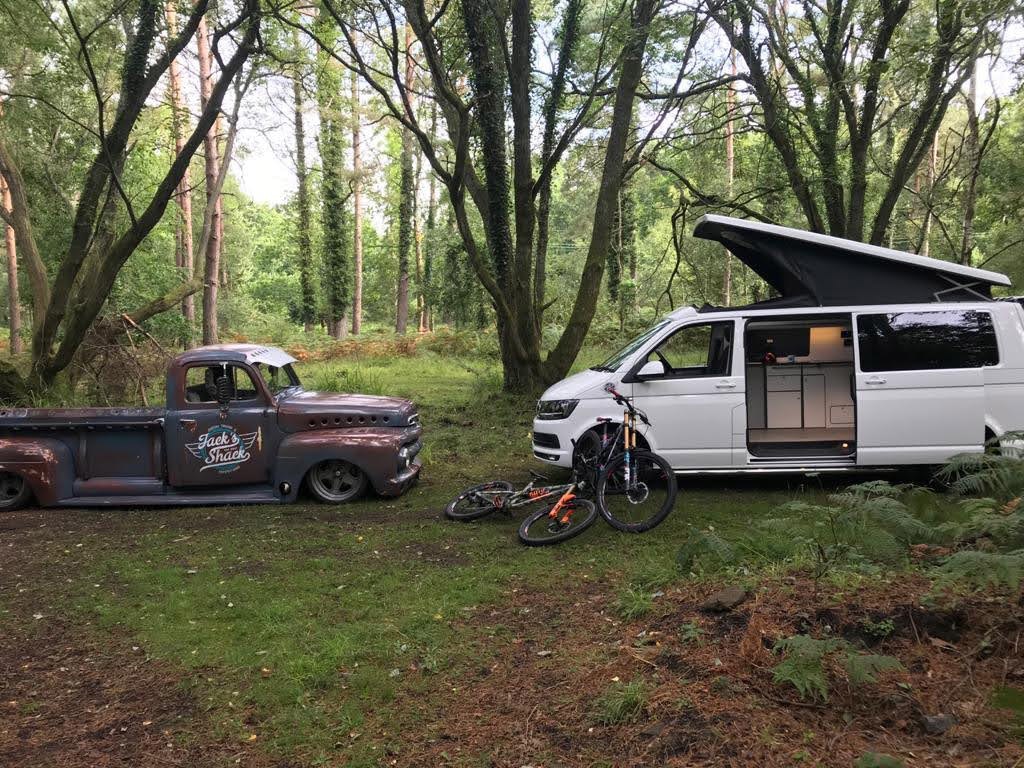 The Ridgeline | This Gee Atherton Footage Is An Absolute Must Watch

The post Ben Deakin and The Jackal | Mountain Biker Gets Hands On With A Beast In The Forest Of Dean appeared first on Mpora.